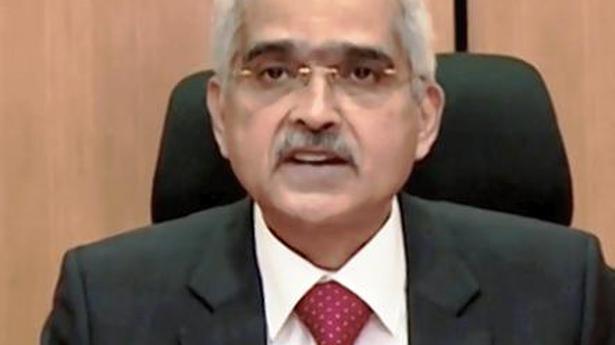 India’s economy is ‘almost at the doorstep of revival’, Reserve Bank of India Governor Shaktikanta Das asserted on Wednesday, adding that banks and non-banking financial companies (NBFCs) had raised, or were in the process of raising, capital to ensure adequate credit availability for businesses once the revival took hold.

The RBI’s monetary policy and the government’s fiscal policy were working in symmetry with an expansionary focus and an accommodative as well as counter-cyclical stance, Mr. Das said. The government would have to revisit its fiscal roadmap once the worst effects of the pandemic had been contained, he added.

Stressing the need for urgent governance reforms in both public and private sector banks and NBFCs, Mr. Das said this had been a lingering concern since the 2008 global financial crisis and needed attention.

“At this juncture, reforms in governance of banks and non-banking finance companies, especially in India, are very important. People mostly mix up banking reforms with ownership reforms,” he noted.

“Banks with robust governance practices, internal control systems, risk assessment and who do not undertake smart accounting, if I can put it that way, are the ones that are never overleveraged and not only survive, but grow in every crisis,” he said, adding that this was an ownership-agnostic issue.

Mr. Das was speaking at an event to release Portraits of Power, an autobiography of N.K. Singh, Chairman of the 15th Finance Commission.

“Post COVID-19, once the pandemic is contained, the government will certainly have to spell out a fiscal roadmap to adhere to the [60%] debt-to-GDP target that Mr. Singh and his committee [to review the Fiscal Responsibility and Budget Management law] had set out,” Mr. Das said, pointing out that the general government [Centre and States’] deficit was already exceeding the targets for this year.

“India is at the doorstep of revival process after the effects of the pandemic. And it’s very important that financial entities have adequate capital. Many of them have already raised capital, others in public and private sector are planning and would certainly do so in the coming months,” he said.

The RBI had asked all banks and NBFCs to build capital buffers so that credit is available to support growth when the economy’s revival phase begins, the central bank chief added.