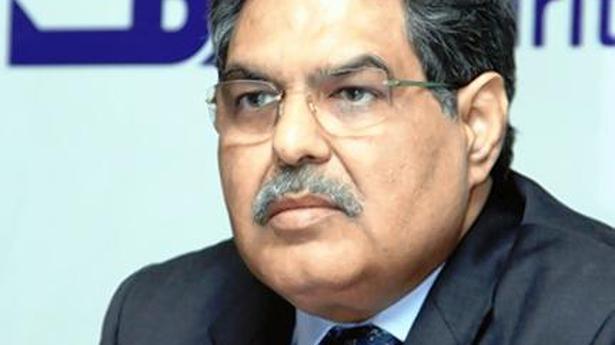 The current stock market rally, in the backdrop of the challenging times caused by the COVID-19 pandemic, has been broad-based with large and mid-cap stocks gaining 55% and small-cap stocks 70% Ajay Tyagi, Chairman, Securities and Exchange Board of India (SEBI) said on Wednesday.

Stating that the secondary markets reacted adversely in March following the declaration of pandemic, with lower circuit breaker getting triggereding on two occasions within a span of two weeks – an occurrence which that had never happened in the past — he said the volatility index, or VIX, rose to 84 in March from an average of 15 in the previous three months.

Mr. Tyagi said the markets had since recovered with SEBI taking timely surveillance mesures with respect to exposures and margins to curb volatility.

“The Sensex/Nifty today is very close to the all-time high hit in January,” he said.

“Volatility has also relatively stabilised with the VIX now hovering at around 25,” Mr. Tyagi said at a virtual Confederation of Indian Industry (CII) event.

On the narrative that liquidity and low interest rates were primarily boosting the markets and that there had been a disconnect between the markets and the real economy, the regulator said the recovery had been broad-based owing to SEBI’s policy measures.

“It is not just the large-cap but also mid- and small-cap indices which have recovered since the lows hit in March,” he said.

He said investor participation in the equity market had risen, with the average daily turnover in the cash market in this financial year about ₹60,000 crore, or 54% higher than last year.

He said during April- September this year 2020, 63 lakh new demat accounts were added compared with 27.4 lakh accounts in the same period last year, up 130%. He also said India had received about $11 billion in net FPI investments in the equity markets, till date in this financial year.

“While most emerging markets, including Brazil, Taiwan, South Korea, Thailand, South Africa and Malaysia, have witnessed FPI outflows this calendar year so far, India has witnessed net FPI inflows during the same period,” he added.

Mutal funds had recorded net inflows of ₹1.47 lakh crore in this financial year till September, he said, adding that in the case of primary markets, the total funds raised had touched ₹1.54 lakh crore till September, just short of the ₹1.58 lakh crore raised during the same period last year.

“Almost all IPOs and rights issues this year have been oversubscribed several times. Further, over ₹22,000 crore equity issuances are in the pipeline.”

He also said the funds raised through corporate bonds this financial year till September was about ₹3.8 lakh crore, or 25% more than the year-earlier period.

“SEBI’s policy measures have somewhat contributed in facilitating the rather satisfactory working of both the primary and secondary markets in these gloomy and uncertain times.”